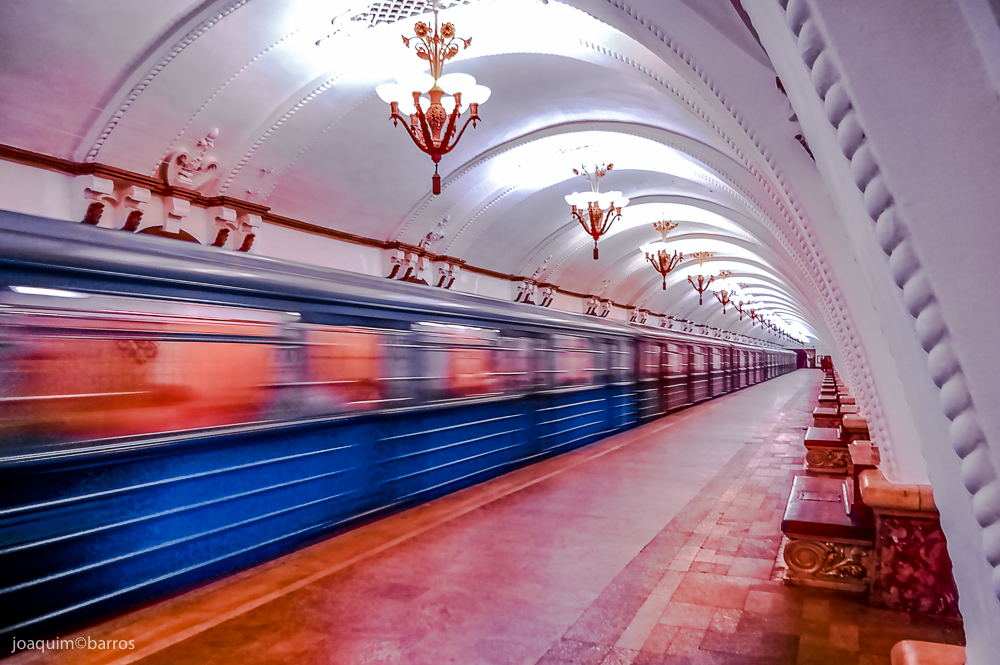 Year 2006 collection. “This is a ruthless world and one must be ruthless to cope with it.” Charlie Chaplin

In 2006 I was in Moscow for a 3 months work assignment in a brand-new factory was built for the company I was working for. I spent most of the weekends doing photography. It was winter, harshly cold and boredom. That was outside in the streets but inside the subway lines anywhere in the world is always warm and Moscow make no difference from any other city, except that Moscow subway lines are real museus of art when it comes to architecture, and one can spend hours inside without being tired.

I wanted a picture as it came out. The cars moving and the platform empty. I waited and waited in the extreme corner of this articular station until I got what I was aiming for. Somehow, probably viewed from the security cameras, I might looked suspected for them to be so that long inside the subway and in particular in the corner of that platform without embarking. When I was satisfied and about to leave, a guard coming just from the right side of this photo, took my arm, pulled me ruthlessly while talking his Slavic language and dragged me, pointing the way out, without any explanation or showing any signs of mannerism, even after realising I had a photographic camera in my hands and was not a local. 1+1 should this make someone realize I was a tourist… I had no possibility to argue despite showing him my camera to indicate I was just taking photos. The man, built like a statue, did never gave me any chance for arguments; vne! vne!

Although it was not forbidden to take photos, it was noticeable that people did not really like it, their mood and body language would say so. Probably I was annoying the guards through their viewfinders or someone had complained. Anyway, Moscow does not seems to be the most friendly place when it comes to people’s welcome. Not at that time for sure because I had a few bumps of this type in other places of the city. But if there is a reason to visit Moscow, the subway  old lines (specially the ones built before years 60) are worth the trip.