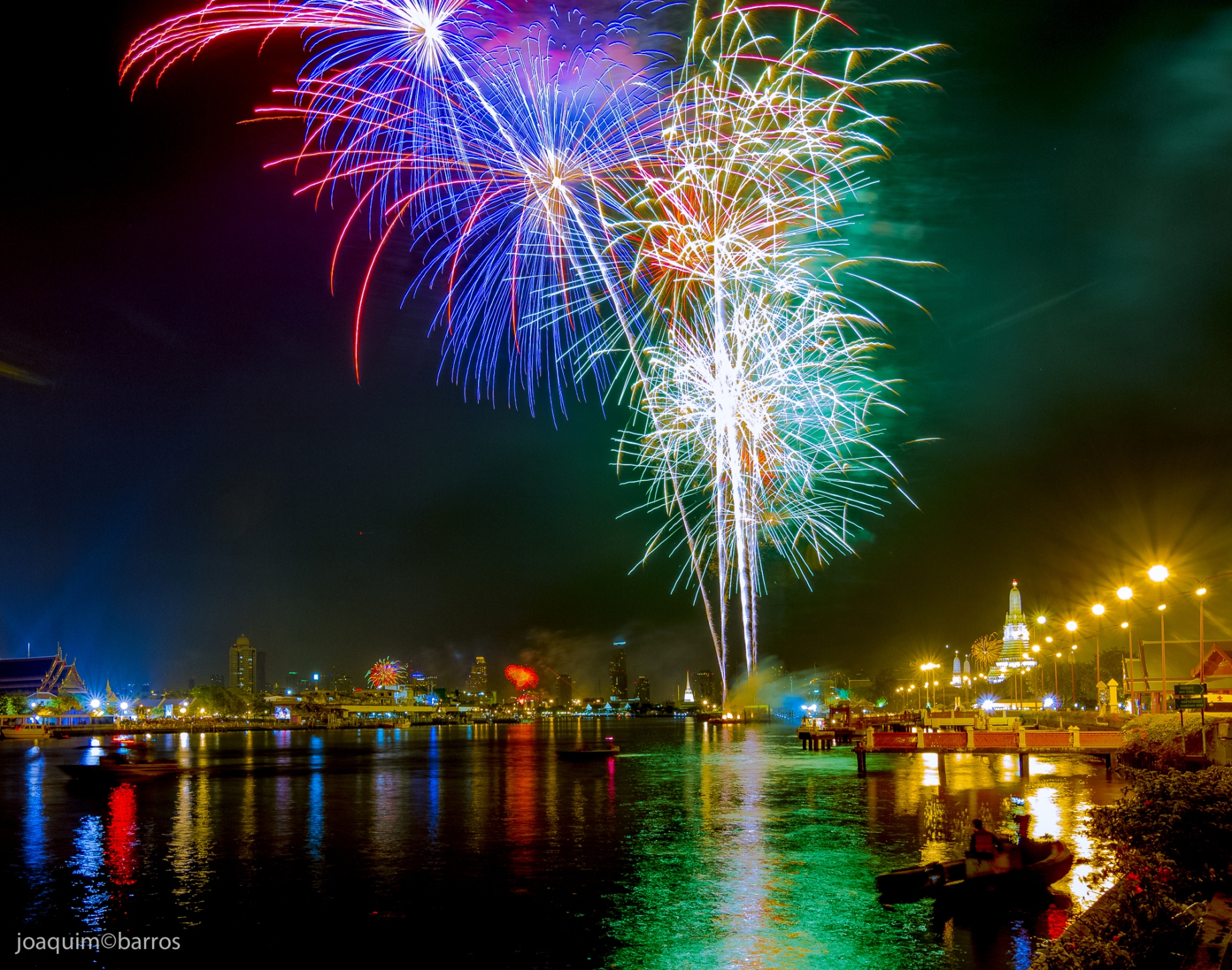 Year 2016 collection. “If you do not expect the unexpected you will not find it, for it is not to be reached by search or trail.” Heraclitus

Together with my wife we looked for a place to do the New Year Celebration’s photography while in Bangkok. We did the plan and went to see the potential places 3 days before to make sure I wouldn’t miss it. Wat Arun was a place we knew it would be the major center of a lightning show and a firework display in Bangkok’s New Year countdown but we knew it would be almost impossible to get inside, were everybody was going or wanted to be. So we decided to look around the vicinities, in the small alleys leading to the Chao Phraya River water front and found nothing but the Royal Thai Navy Army facilities. My wife took the initiative to walk into the Royal Thai Navy Conventional Hall and talk with a high ranked officer to ask permission to be there on the countdown moment. His secretary gently helped us and in ten minutes we were requested to walk-in into his office where I explained my objectives and after some chat in Thai he agreed to let us walk-in on the 31st provided we leave our identification with the guard on duty. This was done well in advance and I was sure I could get a nice spot for my night photography. The place was just fantastic.

On the New Year’s Eve we drove into the Royal Thai Navy camp. We arrived 3 hours before midnight and, as expected, the surroundings of Wat Arun were impossible to drive around. The traffic was jammed, it was packed with dwellers and crowded by people arriving by any means of public transport. Lucky we predicted it and decided to get there earlier because the Navy Camp is just two steps away of Wat Arun and we had, somehow, to cross this area.  The guard let us in and indicated the parking place. After parking I carried my tripod, my photographic gear and walked to the water front to the spot I previously choose as the best to get hold of night activities and the temple scenery.

After some shots and experiments with my camera’s night settings I was virtually ready but still one and half hour to go for the midnight countdown. Excited with this spot I recall to mention to my wife I was surprised not to see any other photographer but me inside the compound. In other hand I noticed a sudden calm of boat activities, specially River Cruises, on the Chao Phraya River between Rama 8 Bridge and the Phra Phuttha Yodfa Bridge (Memorial Bridge). Only small militar boats roaming the water front were to be seen.  I shouldn’t have mention anything because devil always listen our bad thoughts… 🙂  and a few minutes later someone from the Militar Police came and talk with my wife. He want us to leave. The Militar Policeman on duty couldn’t say much after my wife explained we had a permission from someone highly ranked. Then he called someone, higher militar ranked too and responsible for the security which approached my wife and after a Thai greeting wai, he explained that in normal circumstances wouldn’t be a problem with the permission but due to Thai Government agenda for the night the permission had to be overturned; the Thai Prime Minister would come to the place for the countdown and, (obviously understandable!), for security reasons I had to move farther away if I badly wanted to stay there. This was not a matter for arguments and, after the same militar gently apologised, we both greeted with a Thai Wai and I moved farther to the end of the camp.

The visibility was quite Ok but, from a photography point of view, there were many obstacles in front of the lens; I have to deal with militar piers and walls but, and mainly, the annoyance came from the lights of the compound that caused so much trouble to my camera settings and hiding and on the way of the main objective which was Wat Arun seen on the far right of my photos.

Well, I appreciated all the good wills of the responsible and have no complaints. The photos did not came out as I expected and imagined but they are a good souvenir. Nonetheless I thank the Thai Royal Navy for their gentle approach in such circumstances. They could have rightfully ask me to leave the camp at once but decided not.